A few years ago, when the iPhone first came out, I fell in love with an app called "Molecules."  It was easy to use, the images were lovely, and I thought manipulating molecules by touch could help solve some of the problems my students had with using Cn3D.

I was all set to switch.

But I couldn't.  When it came to teaching, I needed features that Molecules just didn't have.

To make a long story short, we had an SBIR grant from National Science Foundation and the good fortune to work with Molecules' developer and another brilliant engineer to make a new app called "Molecule World."  Molecule World world has the same lovely rendering styles as Molecules plus additional features that I had to have for the classroom.

Looking at the app store, many features in Molecule World are pretty easy to identify. What isn't obvious on the surface are all the changes we made to update the science.

The statistician George Box, is credited with saying that "All models are wrong, but some are useful."  What he didn't say is that, over time, models can be improved, and hence become more useful. With some molecular modeling software  it's been twenty years or more since the original models were developed, leaving considerable room for improvement.  Molecules (1), created in 2008, was based on RasMol (2), which was developed in 1992.  Cn3D was first published in 1997 (3).

Both of RasMol and Cn3D had occasional updates. RasMol was last updated in 2009 and Cn3D, was updated to iCn3D in 2016.  Nevertheless some of the underlying assumptions were never updated to reflect current scientific knowledge.

I've been happily using molecular modeling modeling programs since 2000, all the while blissfully unaware that hydrophobicity profiles were proliferating.  Gone were the days of Kyte and Doolittle (3) when one plot could be drawn to rule them all.  People weren't just conjecturing anymore.  They were doing actual experiments!

This presented us with a dilemma.  Which hydrophobicity profile should we use?  As far as I could tell, RasMol and Cn3D were stuck in 1982 with the Kyte and Doolittle profile.

After some agonizing reading, I voted for the scale with the best empircal data.  We use the Wimley White whole residue scale for hydrophobicity.

Of course this does confuse students a bit since some of their textbooks still use data from 1982.  We're working on that part, too.

The other item we updated was the atom size. 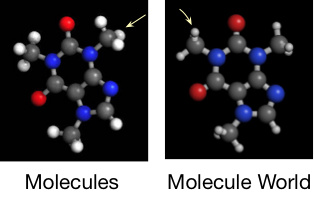 It always bothered me that molecular modeling programs like Cn3D and Molecules drew hydrogens the same size as carbons and oxygens.  If you look at a periodic table, you can see that hydrogens have a smaller mass.  I strongly felt that hydrogens should be smaller in our drawings as well.  Any time we could find empirical data for the diameters of different atoms, we used that data in Molecule World.

Our models are still wrong, as all models are.  Since they depend on original data, our models suffer from missing residues, unfound atoms, and the choices researchers make when they interpret their data.

But with new hydrophobicity profiles and empirical atom sizes, our models can be a little less wrong and a little more useful.