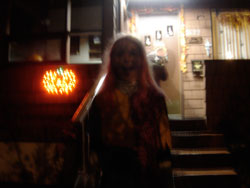 When purified, it glows with an unearthly light. You can't go "chemical free" and try to escape it. It's part of our bones and it forms the backbone of our DNA. A tool for good, a tool of war, essential for gardening, and infamous as a pesticide; phosphorus is truly an amazing element. Amazing too, are the stories about it's discovery and our history with using it. Many of the stories in The 13th Element by John Emsley (2000, John Wiley & Sons), from the alchemist's bench to the murderer's kitchen, are well-suited to reading on a Halloween eve.

From the nightmare inspiring stories about the Gnandenshuss, "the shot of grace" used for people splattered with burning phosphorus after air raids in Hamburg, Germany, to the origins of the Salvation Army, Emsley holds our attention with continual surprise and a well-researched history.

As a child I cried in sympathy when I read Hans Christian Anderson's "Little Match Girl," a story of a little match girl freezing to death on a cold winter night. Little did I know the match girls were real. The Royal College of Surgeons even has a display of their jaw bones that illustrates the torture derived from their profession. Emsley tells the sad story of one match girl:

When she was twenty-four one of her wisdom teeth started to ache and, eventually, it got so bad that she visited a local dentist. He could see it was too decayed to be filled and pulled it out. The cavity it left behind refused to heal and, after a few days, it began to discharge a vile-tasting pus which gradually became worse until it sometimes oozed from her nose. Still she worked on at the match factory. Eventually her jawbone became exposed and one day a piece of it came away.

She had phosphorus necrosis...

It's an amazing story and the connection with the Salvation Army is amazing as well. I never knew that they began in part from a desire to make matches with humanity.

As for spontaneous human combustion, Emsley meticulously researches cases where it might have happened. And finds in phosphorus, a possible, although he says unlikely, explanation.

Diphosphane, P2H4, is a flammable gas used in distress rockets and self-igniting flares. It can be produced in the human gut, in small amounts, and could, possibly be the culprit.

Phosphorus could also be the agent responsible for ghostly figures and unexplained lights that flit across the bogs at night and inhabit swampy graveyards. In 1993, microbiologists found that bacteria can make phosphane and diphosphane. In swampy areas, where archea make flammable methane, this could lead to flares of light and the appearance of ghostly sights.