This summer, I had the good fortune to attend three (or was it four?) conferences on science education. One of the most inspirational conferences was one on Vision and Change in Biology Education. This conference was co-sponsored by the National Science Foundation and the AAAS. It was a call to action for biology educators and many of the points and findings resonated deep in my bones.

Then, I read the press release from the AAAS.

And right there in the middle, I found this statement from the AAAS CEO, Alan Leshner.

Leshner said the goal of undergraduate education should be to give students a "fundamental knowledge of what science is, and what it is not, along with some key concepts."

He also cautioned the conference participants not to fall into the trap of shifting the goal toward developing a scientific workforce, but, rather, remaining concerned with science for all undergraduates. 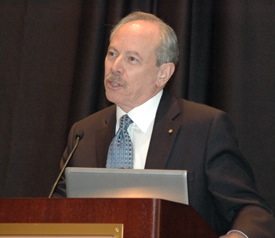 He gave a great talk, and I was in awe, until I read the press release.

I know it's unfair to jump on one sentence, but after that point, all I could think about, is that the man must be completely clueless and out of touch with the reality of both the needs of students and the life science industry. Statements that imply that workforce doesn't matter and that biology educators should avoid "falling into the trap" also imply that biology is only for those wealthy students that won't need to find jobs after college.

I have heard this from other college faculty before.  Apparently you shouldn't consider a college education, and certainly, not an education in life science to be some kind of ticket to employment.  SCIENCE (all of you fall down on your hands and knees, okay?)  is only for those with independent means or those who plan to go to medical school.

I mean, it must be nice to just go to school and not be concerned about learning any sort of marketable skill. Unfortunately, while Leshner compliments college biology teachers for ignoring notions about job preparation, students are the ones who will pay the price.  Even those who go on to graduate school, eventually have to learn bench skills.

Maybe it's my background in post-baccaluaureate education (i.e. community college teaching), but I simply do not see why preparing students for jobs is a bad thing. We expect engineering majors to know how to go out and be engineers. We expect mathematicians to do math and software engineers to write programs.

Are we biologists somehow more pure than engineers and mathematicians?  Why can't we expect biology majors to know some of the skills that might be helpful for the life science workforce? Why ask them to go on and take another year of classes at a community college so that they can be prepared for a job?

Why would Leschner's statement help limit diversity and restrict science to the upper-class?

Because some people need more assurances that their education will lead to a job.

My community college colleagues have taught me some new things this summer. First, the people from the NSF-funded MATE ATE center found that people from lower socioeconomic groups look at salaries first when they visit career web sites. I interpret that finding to mean that they care about salaries. Second, the people I know who've had success in getting students from lower socioeconomic groups into scientific careers found that one of the major obstacles they had to struggle against was the negative perception of science on the part of students' families.

Why would students' families think studying science is a waste of time?

Perhaps it's those families heard the kinds of messages that Dr. Leshner has shared:

Science is for people who don't need jobs. Science instructors at four colleges and universities do not care about helping you prepare for a job.

They hear those messages loud and clear and those message says: if you need a job after college, science isn't for you.

I disagree.  I think biology faculty have a responsibility to learn something about the outside world and share that knowledge with their students.

We will never increase diversity in science unless we can show students a more tangible reward.  I know knowledge is great for it's own sake, but sometimes people need to eat.