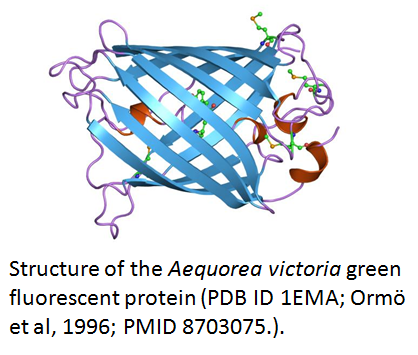 The Amgen Biotech Experience curriculum includes a series of cloning and protein purification experiments using red fluorescent protein (RFP). Fluorescent proteins have become a valuable tool in recent years among scientists in many different fields of biology.  Often, these glowing proteins are linked to other proteins of interest to confirm protein expression, to identify where specific proteins exist in the cell, and to track cell movement. Green fluorescent protein (GFP) is perhaps the most well-known fluorescent protein.  Isolated from the jellyfish Aequorea victoria, GFP is comprised of 238 amino acids that form 11 beta-sheets that roll in to a "beta-can," as seen in the image of GFP (right) from the European Bioinformatics Institute.

The PowerPoint presentation "Using and Analyzing Fluorescent Proteins" introduces students to some of the ways that fluorescent proteins are used in biology.  Protein Data Bank identifiers (PDB IDs) are provided in the PowerPoint for various fluorescent proteins.  Students can then visualize these proteins with the new Molecule World app.  After seeing the striking structural similarities of all fluorescent proteins, students learn how to compare DNA and protein sequences with the ubiquitous bioinformatics tool BLAST (Basic Local Alignment Search Tool). By the end of the activities, students will be able to answer the following questions: 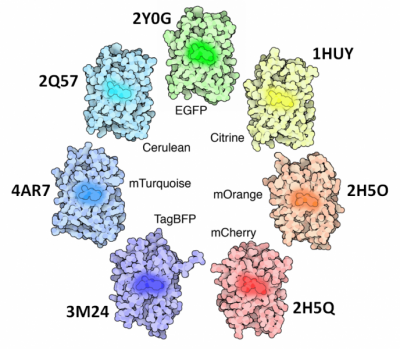 Coloring by hydrophobicity shows that hydrophobic residues (brown) are located in the interior of the protein with hydrophilic residues (blue) on the outside. The white residue in the center is the fluorophore. 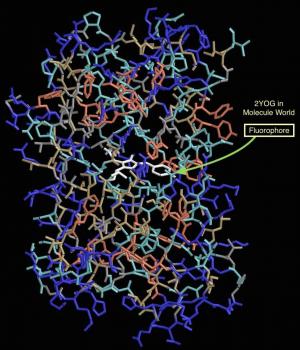 New user? If you're a college or K12 educator, register here for an Educator account